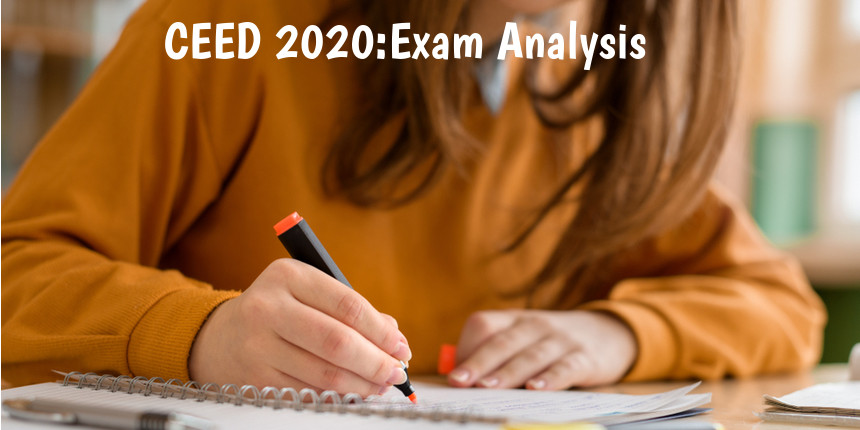 CEED Exam Analysis 2020 - Indian Institute of Technology, Bombay conducted CEED exam 2020 on January 18. To that note, Careers360 brings to you CEED 2020 exam analysis from experts and students who appeared earlier for the exam. The main purpose of providing the CEED 2020 exam analysis is to give aspirants a peek into the entrance exam. As per CEED 2020 exam analysis, the difficulty level of the paper was moderate. In part A, students took 25 minutes to answer numerical answer type questions and they found multiple choice questions easy. According to them, time was a major constraint. In part B, they were asked questions based on character design, 2D graphics icon, problem identification on toothbrush, mixer grinder. To prepare for the CEED 2020 merit list, the candidate's performance in both sections will be taken into consideration. Part A is a computer-based screening test(CBT). It gauges visualization and spatial ability, analytical and logical reasoning, environmental and social awareness language and creativity, observation and design sensitivity. There were objective type questions in CEED - numerical answer type questions (NAT), multiple select questions (MSQ) and multiple choice questions (MCQ). Part B assessed drawing, creativity, communication skills, and problem identification skills. To know all the details about the CEED exam analysis 2020 such as the difficulty level of the questions, whether there is a change in marking scheme and what type of questions were asked, read the article given below.
Latest - CEED 2020 final answer key released on February 4. The result of CEED 2020 will be announced on March.

There are a few changes in the distribution of the questions in CEED 2020 and the marking scheme. Also candidates should be aware of the revised CEED 2020 syllabus. The highlights of the changed exam pattern are:

There is no negative marking in section B as it is a drawing section. The new pattern of CEED 2020 Part B is:

CEED Exam Analysis of Past years

Students must practice the CEED sample papers 2020 for better grasp of the exam. In order to help the candidates know better about the format of question papers and the difficulty level, here is the exam analysis of previous years.

Overall CEED 2019 paper had the same difficulty level as the previous year CEED question paper and was pretty straight forward. The range of topics covered in CEED 2018 was as expected, however there was a difference in the mix of questions asked. More weightage was given to Mental Ability, Logical Reasoning, Visual-Spatial Ability and Math as compared to General knowledge.

General knowledge questions asked were more application based. Topics covered included knowledge of photography, audio, video terminology (screen resolutions), printing etc. Only one direct GK question was asked in which four objects were given- a cup, a fan, a toy, and ceramic piece and you had to match the items to the state of India it was associated with images of a Palki (palanquin) were given and you had to choose the right image, this required application of basic physics in which you had to judge the center of gravity.

The exam pattern of part A was as follows:

The paper structure for Part B of CEED exam was as follows:

CEED 2018 Part A: It carried a total of 100 marks and was divided into five sections.

CEED 2018 Part B: The drawing section of CEED consisted of eight questions in total.

Therefore, out of eight questions given in the paper, a student had to answer four questions in total.

Part A of CEED 2017 consisted of three sections.

The difference from last year was that, this year the NAT did not have any negative marks. This means that the students could take a wild guess and would not be penalised for it.

Overall, the paper was a little difficult and the branch specific questions were quite lengthy as compared to previous years’ papers. Part B comprised of even tougher concept building and sketching questions. Also, many candidates were expecting a full length of 50 marks for the sketching questions but the questions carried only 20 marks and that too had a choice of two. In general, the CEED 2017 raises the bar further even for the candidates who were well prepared.

Similar to last year, CEED 2016 Part B consisted of compulsory questions of 50 marks weightage followed by a single 50 marks question which could be selected from a set of four questions. The pattern for compulsory questions was slightly different than last year. This was primarily because 30 marks were allocated to memory drawing, followed by 20 marks for idea generation question and finally 10 marks for story writing. For the optional 50 marks question, the pattern of last year was repeated, where a candidate could choose to attempt a question out of four choices. These four choices were chosen from a specific branch of design, namely, product design, animation, visual communication and interaction design.

Thus the above article explains in detail the previous years’ analysis and the exam analysis of CEED 2020.

Question: What will I get to know in CEED exam analysis 2020?

Through exam analysis of CEED 2020 candidates can know the section-wise difficulty level, the changes in exam pattern and the marking scheme of CEED 2020.

Question: What will be the difficulty level of CEED 2020?

The difficulty level of CEED exam was moderate

Question: Should I prepare for CEED 2020 with previous year papers?

Candidates who wish to appear in CEED 2020 should necessarily solve the sample papers previous years. This will enhance their practice of the type of questions asked and the duration in which they can solve specific questions. Furthermore the sample papers can be accessed from the official website.

Question: Is there a negative marking in CEED 2020?

Question: What is the weightage of Part A and Part B in CEED 2020?

what is difference between CEED and UCEED

CEED is common Entrance exam for design and is conducted for getting admission in IITs and IISc for their designing courses whereas UCEED is an undergraduate course conducted to get admission in UG B.design for IIT like Bangalore, and IIITD and various other private colleges also accept the scores for the admissions.

can i apply for ceed exam after b.com

As you have a B.com (//B.com) degree you are eligible to write CEED exam. Please click the below link to know the eligibility criteria for CEED https://design.careers360.com/articles/ceed-eligibility-criteria

I have done B Arch from VNIT Nagpur in1998 .I am planning to appear for CEED and persue Mdes industrial design from IIT Delhi after working as design architect for 20 years and worked on commercial projects till date.Will the masters degree in industrial design help me.Will that be a right decision

I don't think that doing masters at this age would be of any benefit. Even after doing your masters you are going to give your 2 years and after that your age will be an actor and you cannot start your career at the age better you can use your experience and get promotion by your work because degree wont help you at this age.

The other factors is that you need to give time to prepare for the exam at this is it is not very ideal age to prepare for competitive exam in also there is not any guarantee of success in the exam.

after CEED which field i was selected??

Indian Institute of Bombay conducted Common Entrance Exam for Design (CEED) for the admission to masters in design programmes offered at IIT.

You can check the further information to go through with the given below link.

after ceed exam which field i am selected??

Dear Sarvesh,
I would like to tell you that CEED Cmmon Entrance Examination for Design) is a national level exam, conducted annually for admissions into the post graduate programmes of design at premier institutes of the India.
You can opt for Technological design Courses in IITs

You can refer to the following link for more details
https://design.careers360.com/exams/ceed

I hope this information helps you

View All Questions
Have a question related to CEED ?