Pan Nalin, the highly acclaimed director of ‘Samsara’, ‘Faith Connections’ and ‘Angry Indian Goddesses’, considered it a “miracle” when he got selected to the National Institute of Design. “I had applied to NID as someone told me there was a filmmaking course there,” says the Paris-based Nalin. But he was soon heartbroken as on the first day at NID, the filmmaking course was discontinued. Some of his batchmates soon left the institute to join the Film and Television Institute of India, but Nalin decided to stay, because “I was high on my new-found creative freedom at NID and its atmosphere”. Nalin went on to study Graphic Design at the institute and decided to become a self-taught filmmaker. “The education at NID, in photography, textile design, printing, industrial design, ceramics and visual communication, all had a huge impact on my career,” he says. “I saw an invisible filmmaking link running through all that was being taught at NID and I was able to use it to my advantage.” Nalin, who ran the NID Film Club for four years, bought an old 16mm Bolex camera and started filming. 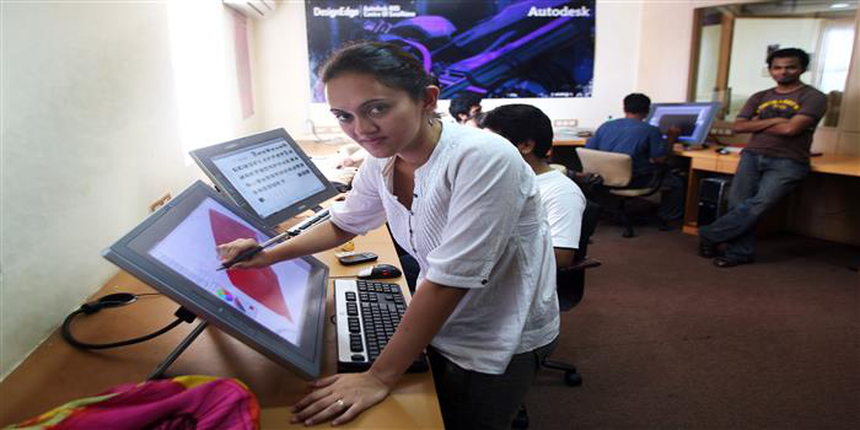 “I never practiced design, but almost everything I learned at NID, I continue to use everyday in everything I do. While life made me a filmmaker, NID made me a lifelong student,” says Nalin.

Nalin’s experience at NID is an inspiration for many students who followed him at the institute. The Film and Video Communication discipline is back on the programme too. Ashwathi Ramesh, a fourth-year student of Film and Video Communication, says, “The institute is training the students to become well-informed directors rather than cinematographers, scriptwriters or editors. We are exposed to various aspects of film such as visual design, story boarding, script writing, sound, music and editing.” Ramesh is currently working on the final editing of her student project, a documentary film on a famous Gujarati artist, Natu Mistry.

Designing with a purpose

Designing is a round-the-clock work at the NID. At the institute’s Textile Design studio, fourth-year B.Des. student Pooja Baviskar is busy weaving cotton threads that look like laces. Baviskar is making a soundproof panel for the auditorium of a top business school in Ahmedabad.

There are 16 other students of Textile Design working on the same project, identified by the students during a visit to the business school under an institute project to pinpoint problems and find solutions. “There were panels in the auditorium, but they were not up to the job,” says Baviskar, who is using weaving as a technique to increase the density of fabric, increase the surface area to augment sound absorption and obtain a 3D structure. “Cotton is a natural sound absorbing material,” she says.

In the Product Design studio, second-year M.Des. student Gonga Naveen Kumar is giving finishing touches to a bicycle-based pedalling skimmer to clean lakes and rivers. The skimmer is made from discarded material, interestingly, to collect discarded material. “The skimmer used currently at the Sabarmati riverfront in Ahmedabad costs Rs. 4.5 crores,” says Kumar, emphasizing the economic and eco-friendly character of his product, aptly named, ‘Gonga Skimmer’. OSMOS, a self-watering planter designed by Gowtham Reddy, a second-year M.Des. student of Ceramic & Glass Design, requires no watering for a fortnight. “The planter is a perfect fit for the interiors with terracotta magnification design. Using a water-filled bowl, the planter works on the porous character of terracotta,” says Reddy. As many as 400 planters, which come with a pot, have already been sold through a partnership struck with second year students of the Indian Institute of Management, Ahmedabad.

A bit of history

Founded in 1961 on the recommendations of famous American designers Charles and Ray Eames for a national design programme to serve the fledgling small industry in the country, the NID has been at the forefront of design education for over half a century. Declared an Institution of National Importance under an Act of Parliament in 2014, NID is located on an 18-acre campus near the Sabarmati river.

The institution’s design solutions for the society encompass a wide range of fields, from community interventions to defence needs. Students and teachers of NID have designed a toilet system for the disabled, path-aiding shoes for the visually impaired, user-based designs for A/C 3-tier rail coaches, and even helped artisans from Africa to improve their livelihoods. The Transportation and Automobile Design department of the institute is ranked in the Top 10 institutions in the sector globally, and the Apparel Design department in the Top 30.

Studio Test and Interviews for NID M.Des Mains Postponed after...

More Jobs and Less Designers - Design is important for social ...

Meet Rajiv Subba and his team who are absorbed in designing hy...

Showing 6 out of 6 Questions
35 Views

Please provide me the list of books for the preparation of nid dat prelims exam.

NID DAT prelims will consist of objective and subjective questions.The recommended books for NID DAT preparation are given below :

Is there any branch of NID in Delhi?

How many students appeared for m.des NID prelims this year?

For further information regarding Nid, visit

Your National Institute of Design Ahmedabad brochure has been successfully mailed to your registered email id .