NIFT 2019 Students’ Reactions - NIFT 2019 commenced in pen and paper based mode to offer admission to students across its 16 campuses. Around 2,370 seats will be allotted to qualified candidates for admission to Bachelor of Design (B.Des) and Bachelor of Fashion Technology (B.F.Tech) programmes. The test takers reached the exam centres on the specified time, along with their parents. NIFT exam is being conducted in two shifts for Creative Ability Test (CAT) and General Ability Test (GAT). The exam started with CAT at 10:00 am and GAT will take place at 2:30 pm. The team of careers360 interacted with the test takers to know about their strategies they are going to implement while taking NIFT 2019 and how they prepared for the same. Have a look at the coverage of students’ reactions below for both before and after the exam. Read the complete article to get full details.
Latest: Candidates are appearing for NIFT counselling 2019 on June 7 . Candidates can NIFT 2019 Cutoff here.
Post - Exam Reactions of Students who Appeared in Creative Ability Test (CAT) of NIFT 2019 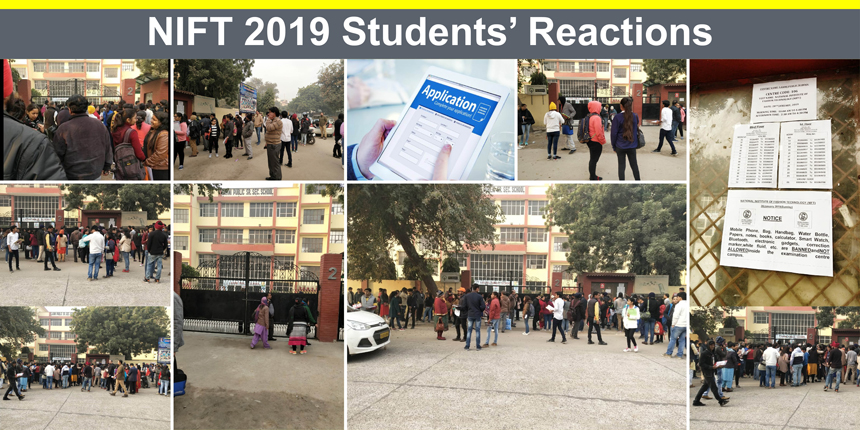 Careers360 spoke to the candidates who took the creative ability test (CAT) of NIFT 2019. Most of the candidates found the questions easy and they were able to complete it within the stipulated time.

On being asked, how was the paper, Isha said, "The questions were easy and I was able to understand them at one go. Moreover, I was able to complete all the questions within the given time frame. On being asked what strategy she would adopt for General Ability Test (GAT), Isha said, " I will try to solve the Maths section first as it is slightly difficult." Her aim is to secure admission in NIFT Delhi, though she is also aware that it is a bit difficult to get admission there.

Sharadha Yadav, who hailed from Allahabad aired similar views as those expressed by Isha on being asked how were the questions. She also felt that the questions were easy.

Some of the students who came to appear for NIFT 2019 were not well prepared for the exam. Talking about her preparation and which particular course she wants to pursue, Milwani said, “I did not prepare very well for the exam as I had my pre-board exams. Right now, I have not thought about the marks that I will score. However, I want to pursue bachelors in Fashion designing”

Meanwhile Tanya was well prepared for the exam as she said, “I am well prepared for the exam. I studied from general knowledge books, solved maths questions and also basic science and English also. I solved the past years sample papers also.” On being asked about the which particular NIFT she si aspiring to take admission, she said that she was still undecided about it.

While speaking to the correspondent of Careers360, Priya told them about her preparation strategy, “ I have prepared pretty well for the entrance exam. Since, it is my first attempt, depending on the questions, I will plan my strategy. There are no specific books which I consulted for the exam. I did solve the NIFT sample papers.” Priya said that she is expecting to score good marks in the exam and she is not appearing in any other entrance exam for design.

There were candidates at the test centre, who focussed on self-study. Simran said, “I did not take any coaching for NIFT 2019 and I mostly did self- study.” On being asked the strategy that she will adopt to crack the exam, Simran said, “ I will focus on time management.”

Yes you are eligible.

Candidates should have completed their Class 12 from a recognised board with passing marks to be eligible to appear for NIFT entrance exam 2020. Aspirants should be below 23 years of age for NIFT admission 2021.

For more detailed information. Kindly go through this link:

I hope it helps you.

How to get prepared for the NIFT entrance exam?

Follow the below points to ace your entrance test

Improve your observation and visualization skills: The main purpose of NIFT exam is to test candidate's creative and imaginative skills.

when is NIFT 2021 is going to be conducted

NIFT 2021 will be conducted most probably in the third week of January 2021.

i will be sitting for NIFT 2021 entrance exam and with both my board and nift preparations, I am worried that I wont get a good rank. Please suggest me a routine and backup too if i dont get into nift. Also i have an extremely busy routine, please HELP.

First of all, do not worry and stress about your exams, just do your best and make the best use of the resources available to you. You still have time to prepare well for both your NIFT as well as your Board Examinations.

Follow a well-planned routine to balance both your Boards and NIFT Preparation. 1. Make use of the necessary study material provided to you.

You can check out the following link for tips on how to crack NIFT Situation Test as well. https://design.careers360.com/download/ebooks/how-to-crack-nift-situation-test?icn=nift-ebook-sp&ici=clevertap_nift_exit-intent

2. Solve previous years papers and sample papers. You can find the NIFT Sample Papers in this link for free download which will be really helpful. https://design.careers360.com/download/sample-papers/nift-sample-papers?icn=ebook-view&ici=ebook-view_related-samplepaper

3. Prepare according to the exam pattern and follow strategy by making your own notes which makes it easy for you to remember when you eventually revise them.

4. Manage your time well and get proper sleep.

You can opt for other design institutes as backup if you don't get into NIFT.

3. Srishti Institute of Art, Design, and Technology and so many more.

I hope this helps, All the best!

I want put my daughter in Fashion Technology as She completed 12STD in Chennai Tamil Nadu. She completed TN State Board Exam, 12th result announced, 75% above scored in all subject.. Maths, Physics, Chemistry and Computer Science and English. we need Career 360 guidance for her Career planning

You must ask to your daughter about her interest. What she want to do? What type of career she would like to choose?

Ask her first of all.

Your interest in particular field is not important, you must know your daughter's interested field to do career in.

Then ask her about Fashion Technology. If she likes then definitely go toward fashion technology.

If you want know more about careers after 12th, you can get here all the courses details:

Refer this link for many career options after 12th.

NIFT Counselling 2020 - Schedule Details And Registration To Be Announced Soon