Top Indian Fashion Designers - How they emerged as global celebs?

In modern times, the alluring and challenging world of fashion has observed a major shift across the globe. There was a time when Indian fashion industry was unknown to the world, but few innovative minds have changed the face of Indian fashion industry on the world map with their vision and talent. The credit for making our industry noticeable across the globe goes to our own creative and zealous fashion designers. 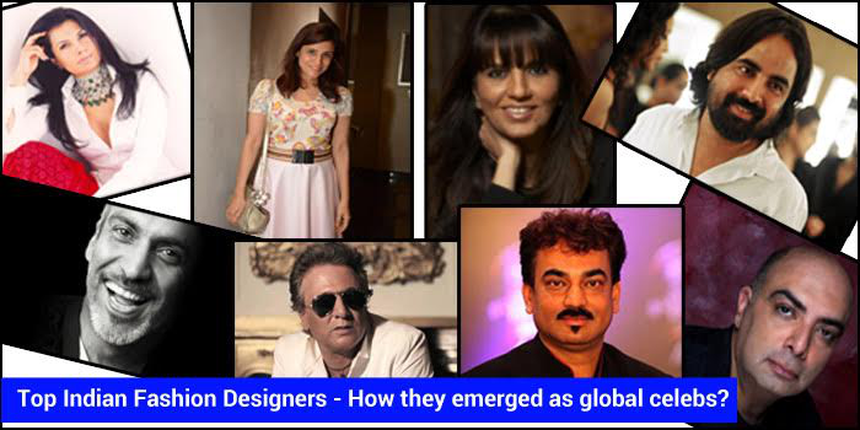 Being a fashion design aspirant, have you ever wondered how was their life before they became celebrities in the fashion industry? You must have wondered how their school life was, from which institute they graduated and when did they get their first break? Get all these queries answered in this article wherein you can know the academic and professional background of the finest fashion designers of India.

Careers360 presents here the journey of top Indian fashion designers who proved their mettle and carved their name with golden letters in the fashion world.

This London born Bollywood’s favorite fashion designer gained access into the industry as a model while he was still studying at Elphinstone College, Mumbai. He joined Equinox, a Bandra based boutique, without having any formal education in designing, where he grasped knowledge about fashion world.

The Indian designer did schooling from Doon School and obtained management degree from University of Pennsylvania’s Wharton Business School. In 1987, he inaugurated “Ensemble”, which is the first Indian fashion boutique.

The distinguished designer established his design studio in 1990. He is the first Indian designer who was invited to present his designs at the Milan Fashion Week. His clientele includes international names like Lady Gaga, Naomi Campbell, Oprah Winfrey, and many more. Indian beauties including Shilpa Shetty, Aishwarya Rai, Yami Gautam, Rani Mukherjee, etc. have also worn outfits designed by him.

The popular Indian fashion designer completed his graduation from NIFT Kolkata in 1999.

He is the youngest board member of National Museum of Indian Cinema as well as one among the Associate Designer Members of Fashion Design Council of India (FDCI).

Born in Kashmir, Rohit Bal did his schooling from Srinagar’s Burn Hall School. The designer completed his graduation in History from St. Stephens College. After that, he took admission in NIFT.

He started his career in 1986 with his brother Rajiv Bal under the company Orchid Overseas Pvt. Ltd. After four years in 1990, he started designing on his own. Rohit is popularly known for designing for the famous show – Kaun Banega Crorepati. His clientele comprises famous Hollywood celebrities like Uma Thurman, Pamela Anderson, Anna Kournikova, Naomi Campbell among others.

Often termed to be the ‘John Galliano of India’, he started his own label ‘Manish Arora’ in 1997. His collaborations include distinguished brands like Swarovski, Walt Disney, Barbie, Reebok, Swatch, MAC Cosmetics, Nivea, Amrapali, etc. Well-known international personalities such as Rihanna, Lady Gaga, Katy Perry, etc. are among admirers of Manish’s creations, and have worn outfits designed by him.

He is among the few Indian fashion designers who have been part of the French fashion house – Paco Rabanne in 2011. He was appointed as the creative director there.

Wendell started his career in hospitality domain, and later made a switch to enter the fashion industry. He did internships at the National Museum of Costume and Fashion in Lisbon and the Museum at the Fashion Institute of Technology, New York.

He returned to India in 1988 after completing the training, and designed for notable companies like Garden Vareli, Lakme and De Beers for next two years. In 1990, he launched his own designer label – Wendell Roderick.

The Goa based designer has designed uniforms for Goa State Traffic Police, Goa Marriott Resort, the Four Seasons, the Vasco Sports Club football team and Goa Tourism Development Corporation. He was awarded the Padma Shri in 2014 for his exemplary contribution to the design and fashion industry.

Rina Dhaka graduated from Government College for Girls, Chandigarh. She did a training project with Intercraft, one of the biggest garment exporters of India. She also took guidance from Evan Grandhal. Rina entered the fashion industry as a model and got into fashion designing by setting up a boutique for her friend.

Jagsharan Jit Singh Ahluwalia, popularly known as JJ Valaya, did graduation in Commerce from Chandigarh. But his inclination towards the design industry made him join NIFT Delhi in 1989. He graduated with awards like The Thapar-Dupont Medal, The Elyxa award, KLM-NIFT Trophy and Prix de Incitation (Paris) in 1991.

After graduation, he started his own label with his brother TJ (Tribhavan Jit) Singh. JJ is the man behind famous brands like JJ Valaya, Valaya Quantum, Valaya Base, Valaya Home, House of Valaya, The Home of the Traveler and JJ Valaya Muse.

He is the first global brand ambassador of Swarovski, as well as founding member of Fashion Design Council of India (FDCI). World famous celebs like Cate Blanchett, Joseph Fiennes, Kareena Kapoor and Hrithik Roshan have worn garments designed by him.

Get real-time alerts on exam & colleges at your fingertips with Careers360 App!

Stay tuned to design.careers360.com for more news and special interviews with fashion and design institutes directors.