What has India contributed to international fashion? 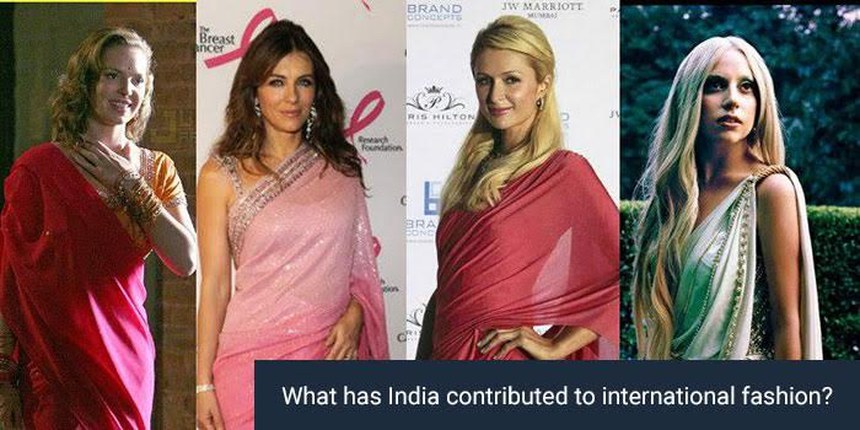 Indianness is ubiquitous- be it architecture, tradition, culture or art. Fashion industry is no exception. We have been unique and have been inspiring the world by setting trends all across. Indian fashion industry, however at a growing stage, has left no stone unturned in setting fashion statements on the world stage. Be it Lady Gaga flaunting Tarun Tahiliani designed saree or Michelle Obama gleaming in evening gown created by Naeem Khan, Indian fashion designers are winning hearts and earning appreciation from every nook and corner of the world.

Indian fashion designers have contributed a lot in the international fashion arena with their incomparable weaves, embroideries, fabrics and designs by bringing together their vast expertise, creativity and innovation. The most fashionable and modish celebrities have pulled off the Indian look brilliantly. Popular high street stores such as Forever 21 and H&M have included the Indian kurti in their collection in one form or the other. It’s not surprising to see that top global labels like Roberto Cavalli, Valentino, Prada, Gucci, Dolce & Gabbana, etc. have also added a pinch of Indianness in their fashion range.

Check out in this article how our styles and designers are ruling the world fashion streets. Have a glimpse of how Indian traditions are being adopted by some of the most famous fashion houses.

Collections of some of the most popular international fashion houses have been inspired by India.

Have a look at such collections below-

Take a sneak peek at the kind of jewellery having a touch of Indianness.

Whole sequence work on the blouse is inspired by Indian fashion trend.

Well-known international personalities such as Heidi Klum, Katy Perry, etc. are among admirers of Manish Malhotra’s creations, and have worn outfits designed by him in big events.

Former First Lady of the United States, Michelle Obama, wore a gown designed by Naeem Khan. The Indian-American fashion designer has also dressed Queen Noor of Jordan, the Duchess of Cambridge and Kate Middleton too.

The graceful nine yards of Indian saree have won hearts of famous personalities across the border. Some of them have worn them to fashion shows, red carpet events and press conferences. Beauties like Paris Hilton, Lady Gaga, Pamela Anderson, Nicole Scherzinger, Naomi Campbell, Elizabeth Hurley, etc. have rocked the Indian attire pretty well.

Conventional Indian accessory such as ‘Bindi’ has been worn by famous personalities around the globe. Foreign singers including Katy Perry, Miley Cyrus and Selena Gomez have sported it very beautifully.

‘Tikka’, an Indian headpiece, has also been worn by Alicia Keys, Kim Kardashian and Isabel Lucas.

Apart from highlighting fashion in terms of apparels, even the art of inking on body (known as tattoos now) was born in our country and then travelled West.

India is all over the world, and celebrities and who’s who of big parties from all across the globe are drawing attention with Indian looks quite well. Indian designers are expected to soon take over the world. Their influence and contributions are getting recognised everywhere.

Top 10 Fashion Schools in the world

Life at NIFT Bengaluru- Experience it with Radhika Gupta

Get real-time alerts on exam & colleges at your fingertips with Careers360 App!