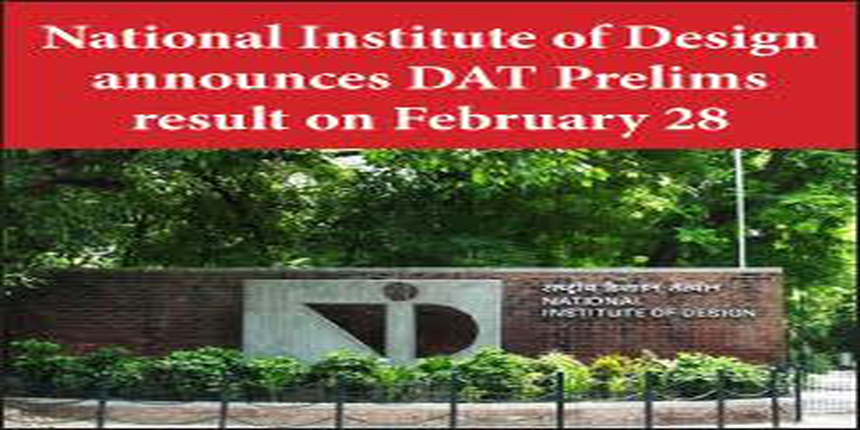 National Institute of Design (NID) has announced result of Design Aptitude Test (DAT) 2017 for B.Des admissions on February 28 at 4 PM. On the basis of scores obtained in NID DAT Prelims 2017 that was conducted on January 8, the Institute will prepare separate merit lists for different categories- Open, OBC-NCL, SC, ST & PwD. It will not send NID DAT 2017 Result Score Card individually to the candidates. The schedule for NID DAT (Mains) 2017 for B.Des will be announced on Friday, 31 March.

On the basis of merit list of DAT Prelims 2017, eligible candidates will be required to appear for the Mains exam. A total of 100 B.Des seats will be allocated to eligible and qualified candidates. In case the scores of two or more test-takers is same in NID DAT Prelim 2017, then they will be assigned the same rank.

Final Merit List of NID DAT 2017 for B.Des will be generated category-wise on the basis of sum total of the weighted scores secured by the candidates at each stage of the admission procedure. They will have to log in to view their final result.

Stay tuned to animation.careers360.com for latest updates and articles on NID DAT 2017.

NID DAT MAINS will include drawing as well as sculpture or model making. It will be a three hour paper and the maximum marks that cam be obtained is 100. Unlike the prelims, it will not be in different parts of contain any objective type of aptitude based questions. It will purely be skill based. Hope that answers your query.

please tell me the syllabus of NID DAT and aieed

Mayank, topics covered in the prelims of NID DAT are:

In the Mains exam, practical based tests are taken. They may consist of one or more of the below activities:

The NID DAT 2020 BDes entrance was supposed to be 3 hours for both GAT and Drawing section, but in my centre in Bangalore the examiners did not give the drawing section until after 50 minutes. This meant that we only 130 minutes for drawing. Unfair! How was it in other centres??

Thanks Harish, However, what you are saying is true for MDes only (which is 150 minutes paper). My query was related to BDes which is 180 minutes paper. As far as I know there is no such notification for BDes exam. It seems unfair to all the students who were not allowed the full 3 hours for both sections.

View All Questions
Have a question related to NID DAT ?