UCEED 2023: The Indian Institute of Technology (IIT), Bombay will conduct the Undergraduate Common Entrance Examination for Design (UCEED 2023) was conducted on January  22, 2023, from 9 am to 12 noon in 24 national cities. The authority released the draft answer key of UCEED 2023 for Part A on January 24.Candidates can raise objectionsagainst the UCEED 2023 draft answer key with proper supporting documents by January 26 at 5 PM. The question paper of UCEED 2023 for Part-A has been released in online mode on January 22.

UCEED 2023: Key changes you must know

What is UCEED Entrance Exam?

Undergraduate Common Entrance Examination for Design (UCEED) is a design entrance exam conducted by IIT Bombay to shortlist the candidates for B.Des admission in IIT Bombay, Delhi, Guwahati, Hyderabad, and IIITDM Jabalpur. The UCEED exam is conducted at the national level once a year in 24 cities across the nation.

UCEED 2023 exam consists of two parts - part A and part B. UCEED part A is a computer-based mode test, whereas part B will be held in pen and paper mode. The total duration of the UCEED 2023 exam is three hours.

IIT Bombay has introduced changes in the syllabus and exam structure for UCEED entrance exams. The revised syllabus and structure of UCEED will be effective in 2024.

As per the new paper structure of the UCEED entrance exam, the question paper will consist of 2 parts - Part A and Part B.

NOTE: The topics given above are exhaustive and indicative of the nature of the questions. However, the UCEED entrance exam may not cover all the topics. 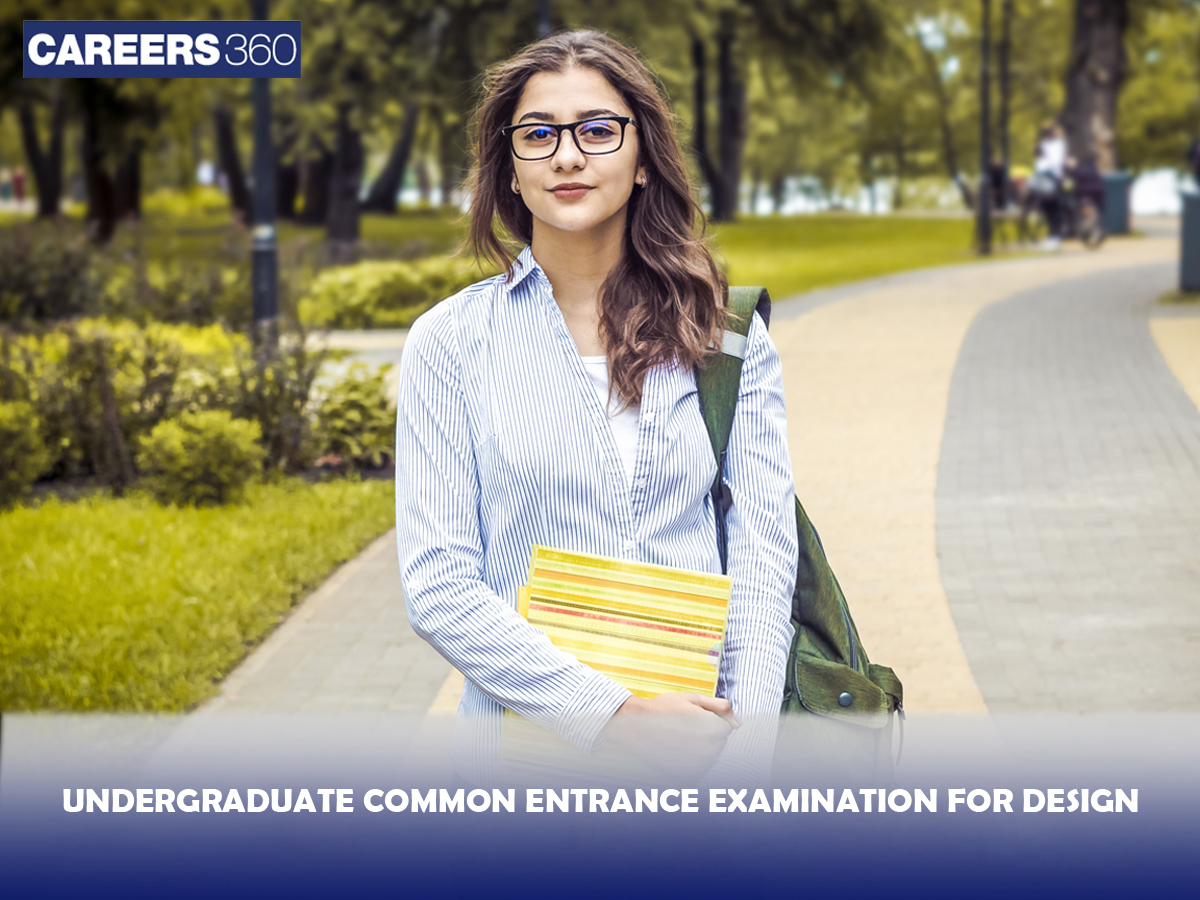 Past Dates and Events

The eligibility criteria for appearing for UCEED 2023 exam are:

The eligibility criteria for applying for B.Des after UCEED 2023 exam are as follows:

The application process for UCEED 2023 exam is as follows:

Following are the registration fee details for UCEED 2023 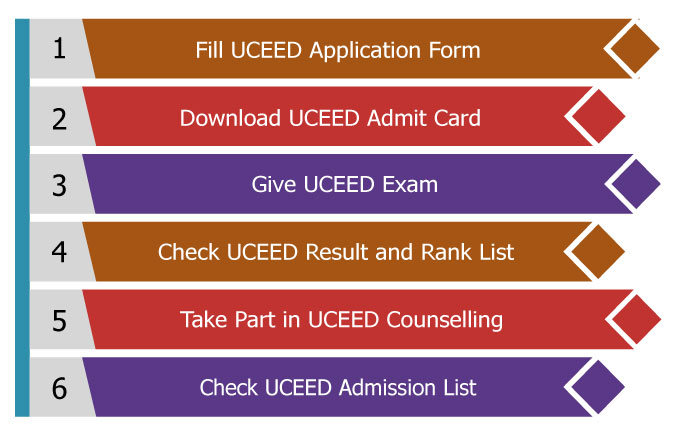 Candidates need to ensure that they complete each and every step that forms a part of the UCEED admission. Merely securing a UCEED exam rank does not guarantee admission. Candidates need to fulfill UCEED eligibility, clear the entrance exam, and thereafter take part in the counseling round in order to secure admission through UCEED 2023. Further, candidates can go through the steps they need to follow as part of the UCEED selection process.

IIT Bombay will prescribe the exam pattern of UCEED 2023 which will include all the parameters of the exam. UCEED exam pattern mentions the following details:

It will be a drawing test for 60 marks to be completed in 30 minutes. Candidates will be asked one question aimed at testing drawing skills. The question will be displayed on the computer screen while candidates will have to answer or draw it on the paper provided. The answer booklet for Part B will be taken away at the end of the exam for evaluation.

IIT Bombay issued the UCEED 2023 admit card on January 13, 2023. The UCEED exam 2023 admit card is an important document that students should not forget to carry with them to the examination hall.

Candidates have to follow the steps that are given below to download admit card for the UCEED entrance exam 2023:

The following information will be mentioned on UCEED Exam 2023 admit card: 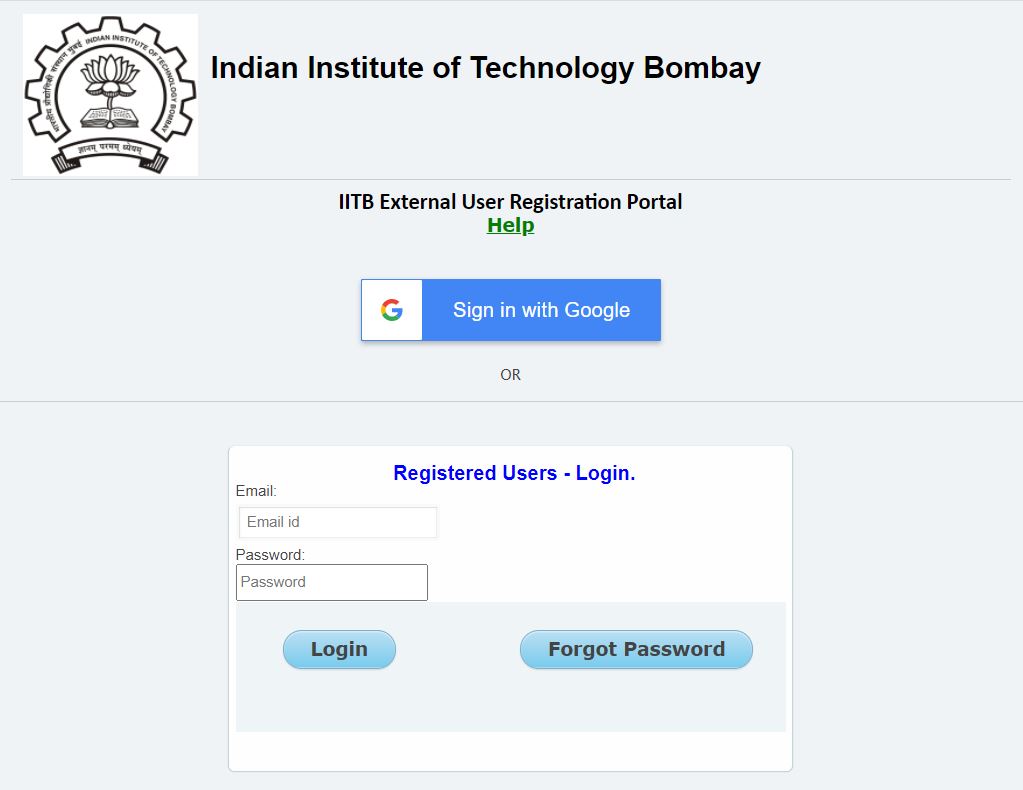 IIT Bombay released the UCEED 2023 draft answer key for Part-A along with the question paper in pdf format on January  24, 2023. The final answer key of UCEED 2023 will be released on January 30. Candidates will be able to raise objections against the provisional UCEED answer key 2023 if discrepancies are found till January 26 at 5 PM.

Candidates can compare their answers with the UCEED 2023 answer key and accordingly calculate their scores. While calculating the score, candidates have to follow the same marking scheme prescribed by IIT Bombay.

NOTE: The UCEED response sheet download page will be inactive and the pdf file will be automatically deleted from the server.

IIT Bombay will declare the UCEED 2023 result on March 9, 2023. The scorecard of UCEED 2023 will be downloaded from the official website from March 11 to June 13, 2023. Part B score, Rank(s), and Total marks obtained are not displayed for the students who have not qualified for UCEED 2023.

Candidates who will qualify entrance test are able to download the UCEED scorecard from the official website. UCEED 2023 scores will be valid for one year from the date of the result declaration i.e. March 9, 2024.

The steps to download the UCEED exam 2023 scorecard are the same as the result except that scorecard can be downloaded for admission purposes by only candidates who have qualified and been awarded a rank.

In case of two or more candidates obtain equal marks, a tie-breaker policy followed will be

Only candidates who score the qualifying cut-off marks in both Part-A and Part-B, each section of the question paper, and the minimum total marks will be included in the rank list.

UCEED Cutoff 2023 - IIT Bombay will release the UCEED 2023 cutoff in online mode on February 9. The cutoff for the UCEED entrance exam 2023 is determined by certain parameters. The actual cutoff for seat allotment differs from institute to institute and category-wise. Candidates can check the UCEED 2023 Qualifying Cutoff below as well as the last year's cutoff marks to get an idea

Second Round of UCEED Cutoff (Past year)

Candidates who cleared UCEED 2023 will have to register for UCEED 2023 counselling and seat allotment. Students have to enter their personal, educational, and contact details in the registration form and also fill out the institutes according to their choice. Once candidates accept the seat at the time of UCEED 2023 seat allotment, then they have to confirm their admission by paying the necessary fee.

Seat allotment will be announced in three rounds. The list of selected candidates in the 1st round of admissions to the BDes programme at IIT Guwahati, IIT Delhi, IIT Hyderabad, IIT Bombay, and IIITDM Jabalpur for Academic Year 2023-2024 is announced.

Candidates will be allotted seats on the basis of UCEED exam scores and choice of institutes as entered by them. Provisional letters will be sent to selected students on their registered email IDs. Thereafter they must pay the seat acceptance fee of Rs. 60,000 (Rupees Sixty Thousand Only) for GEN/ EWS/ OBC-NCL and Rs. 15,000 (Rupees Fifteen Thousand Only) for SC/ ST/ PwD through an online payment system

Guidelines for UCEED 2023 seat allotment are:

Other institutes that accept UCEED 2023 Scores are as follows:

Question:When will the draft answer key for UCEED 2023 to be released?

Question:When will the UCEED 2023 result to be declared?

Question:When will the final answer key for UCEED 2023 to be released?

Question:When will the UCEED 2023 admit card to release?

Question:What is the use of UCEED exam?

Undergraduate Common Entrance Examination for Design or UCEED is conducted by IIT Bombay in order to shortlist aspirants for admission to the BDes courses offered by the Industrial Design Centre (IDC) of IIT Bombay and Departments of Design at IIT Guwahati, IIITDM Jabalpur, and IIT Hyderabad.

The Department of Design of IIT Delhi is also going to provide admission to candidates to the BDes programme offered by it. Apart from the participating institutes, many other Design colleges also accept UCEED scores for admission.

Question:Is UCEED conducted as an online or offline exam?

UCEED is conducted in both online and offline modes. Part-A of UCEED is held in online mode as a computer-based test and Part-B of the exam is to be attempted on a sheet provided inside the exam hall.

Question:How many times can I appear for the UCEED exam?

You can appear for UCEED for maximum two times and that too in consecutive years. UCEED score for admission is valid for one year only.

Question:How many times is UCEED conducted in a year?

UCEED is conducted by IIT Bombay once a year typically in the month of January. This year, UCEED 2023 was held on January 22, 2023.

Question:When will UCEED 2023 be held?

Question:What is the admission process of B.Des in IITB, IITG, IITH, IIITDMJ?

Candidates must have to clear UCEED 2023 and secure a rank to apply for admission in IITB, IITG, IITH, and IIITDMJ. Admission will be offered to the students through UCEED 2023 counselling and seat allotment.

Candidates must register for the seat allotment by providing the required information. Before applying for admission to the IITs’ students are advised to check the eligibility criteria of the institute.

Question:How can I challenge the UCEED 2023 answer key?

The steps to challenge the draft UCEED 2023 answer key are as follows.

Question:What are the best books for UCEED 2023 preparation?

The best books for UCEED exam preparation are listed below.

Question:What is the preparation tips of UCEED 2023?

The preparation tips of UCEED are listed below.

Question:Can I get my UCEED admit card 2023 offline?

Candidates must note that IIT Bombay will not send UCEED admit card personally to the candidates through post or email. UCEED 2023 admit card will be released only in online mode on the official website.

The steps to download the UCEED admit card 2023 is as follows.

Question:What is the last date of filling the UCEED 2023 application Form?

The UCEED exam 2023 application form with a regular fee was closed on November 9. With a late fee, the last date to submit the UCEED 2023 registration is November 16.

Question:What is the fees for UCEED 2023 for female candidates?

Question:In how many rounds will seat allotment procedure of UCEED 2023 be conducted?

The UCEED 2023 seat allotment is conducted by authority in three rounds on April 10, May 10, and June 10 respectively.

Question:When will the UCEED 2023 result be declared?

Your Undergraduate Common Entrance Examination for Design 2023 (UCEED) brochure has been successfully mailed to your registered email id “”.

Eboook PDF has been sent to your Email ID successfully